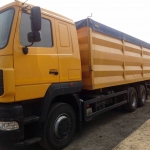 According to the Ministry of Agrarian Policy and Food of Ukraine, this year the grain harvest in Ukraine has already exceeded the historic maximum in 2016. "Given the fairly favorable weather conditions for the late spring crops, our cautious forecasts for a record-breaking harvest in the history of independent Ukraine are coming true. Now as grain harvesting is still in progress, we have more than 66 million tons, which already exceeds the previous high figure of 2016", commented the First Deputy Minister of agrarian policy and food. According to him, the historic record of grain production in 2018 is due to the high yield of corn, which is also expected at the historical maximum. In addition, for the first time high figures are reached on the gross harvest and yield of soybeans and sunflowers, as reported by the Ministry of Agrarian Policy and Food of Ukraine.